The Day I Went Over The Edge

I thought I’d share some of my thoughts and feelings around my experience at the Over The Edge event.

In earlier blog posts, I shared why I was participating in the challenge. For starters, I was nervous about being able to raise enough money—and then of course I was also nervous about actually stepping Over The Edge!

A few weeks before the event my family and I hiked Mt. Ascutney after I had completed the mountain race. Because of my fear of heights, I was unable to walk to the top of the observation tower. Thankfully, my friend Amy, a fellow chiropractor who is a rock climber and who helped me practice rappelling off of her ten foot high porch.

Friday—the day of the event—we finished our work at the office, rounded up the boys, and I half changed into my costume before we headed to Manchester. All day, I had been feeling waves of nervousness. My husband Alex would ask me if I was feeling stage fright or if it was like the gondola ride at Canobie Lake Park. (Early in our marriage, we went to Canobie Lake Park and I thought I would feel ok on the gondola ride, and that it wouldn’t set off my fear of heights. Unfortunately I was wrong and sat there for a few minutes detailing to Alex how I was going to jump out into a tree and climb back down to the ground!) Fortunately I realized that my fear was stage fright—and I was also scared that I wouldn’t be able to do it. Even if I cried the whole way down the building while being coached, I knew I would not regret the experience. But if I got up on top of the building and didn’t go Over The Edge, I would regret it for years. The scariest thing for me to think about was the idea of watching someone not able to take the first step!

Once we got to Manchester, waves of nervousness passed through me as we met up with others from The Youth Council. Soon it was time to kiss the boys goodbye and head into registration with another Youth Council “Edger” dressed as Wonder Woman. Inside the room where we got our harnesses as a group of three, Wonder Woman—who had gone over last year—and Meredith who was going Over The Edge for the Nashua Prevention Coalition. In the room there was a hypnotist. On the advice from someone who had already made it over, I sat down and chatted with him. I’ve had hypnotherapy in the past to help cope with test anxiety, so this wasn’t a new experience for me. But even as the three of us chatted, the waves of nervousness kept coming.

Since the first harness they gave me was too big, I had to swap out to a smaller one—and after getting our harnesses on, there would be no more bathroom trips! After multiple checks on the harness set up, they attached the rappelling gears, and handed me a (still damp from sanitization) helmet. I made sure all of my hair was pulled back, and Meredith had to tuck my braid in on itself as it was too long. Next we took a very fast elevator ride to the 20th floor where we took stairs the rest of the way to the roof.

The roof was set up with water coolers, snacks, and a popup shade tent. We learned how to use the different pieces of equipment and I practiced doing a one foot rappel off of an I-beam. For the next hour we waited, chatted, and watched others go over. As more people went over, we got to see someone in a T-rex costume at the top—and we could see that we were getting closer to our turn!

When there were only four people left to go before us, there was a correction on the scheduled times and suddenly I was next! I was next for the blue rope. But, a woman was up on the roof at that point, and I could tell she was scared—her legs were shaking. We watched and waited. And then she stepped back down from the ledge back to the roof—which was the hardest thing for me to see. As I had already told Alex, this was the one thing I really didn’t want to see—and the one thing that could shake me—and there it was right before it was my turn to step up to the ropes!

But, I stayed focused and remembered what Amy taught me. Instead of looking down or over the edge, I focused on the people helping attach me to the rappelling ropes. I looked everywhere but down or over the edge. While It was easy for me to sit on the roof edge and talk, standing up was challenging. My arms were too short to reach the tripod, so I was attempting to stand up on the edge, while attached to many different things, all while using the rope to hold on to while trying very hard not to look down. The tripod was shaking a little, everyone assured me it was safe, but the shaking was a bit unsettling to say the least!

Once I was standing, a photographer started taking pictures of the edgers. The attendant helped me step to the edge of the building offering to tell me when I got there. I stayed focused on the people on roof, my hands, the ropes in front of me, and my feet as they were on the edge. I didn’t want anything to shake my resolve. The photographer took a few more photos and in hindsight I wish I had done some goofy stuff, but in that moment I just wanted to take the steps necessary to commit to the rappel.

When I started stepping back, I kept my focus on my feet, one step then two steps. I looked up at the tripod, then focused on my hand holding the gear. I did not let go with my right hand though I could if I wanted to with this safety gear. I stepped backwards slowly and found that instead of having to force the rope through the mechanism, it moved smoothly and almost too fast. After several steps I was standing on the windows on the side of the building. I struggled to touch the side of the building with my feet. The rope was releasing a bit faster than I wanted it to, and my legs felt too short! I kept trying to just keep walking backward. I kept trying to go slow while avoiding locking the secondary rope because I did not want to have to fiddle with the equipment on the wall.

I continued to keep looking up, and while I was looking at the windows, the only image I remember is seeing the back of a Dell monitor on a desk inside.  I counted each floor I completed, but after about six floors, I gave up trying to walk on the wall, and just hopped from ridge to ridge, dangling my legs between. While I originally didn’t want to do it this way, it became more comfortable. I looked up to see how far down I had come, and occasionally I would look to the sides and diagonally down to the streets below—but I never looked directly down!

On the way down, I took moments to pause, breathe and just reset my bearings. I was surprised at how well I was handling the fear—but I still wouldn’t look down. I could hear people below cheering, but the only voices I recognized were my sons’, my husband’s, and friend who invited me to do this crazy thing. The things I remember from the event are strange, I remember how the rope sliding fast through my right hand felt, and how I was worried that I would pinch myself with it. The rappelling controls were sensitive, and like the hot and cold water in the shower, it was near impossible to get it to the right speed. I was warned during set up, that the activity is hard on the arms, I did not realize how difficult it would be until I was starting to fatigue. When I was about halfway down, an announcers introduced me and I heard the cheers getting louder.

On the last fifteen feet of the rappel, I realized that I could get hurt if I released the rope too quickly. If I did, there might not be enough distance for the safeties to stop me before ground impact. I was also completely dangling now, with no building for support, as I was being pulled away by the grounds crew from the bushes at the side of the building. I slowly descended to the ground and sat down. I was helped up, handed a cold water bottle—which someone was kind enough to open for me.  But my next thought was: can I get in line and go again? My husband helped me manage the recovery from the adrenaline spike. I snacked on peaches, posed for pictures and congratulated other edgers. 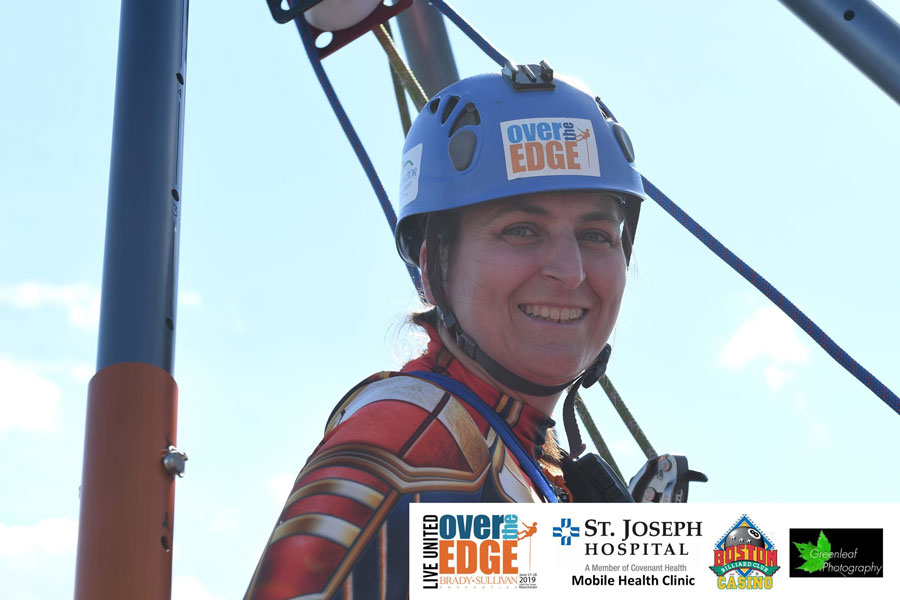 In the end, I raised $1300 (from 34 individual donors) for the Youth Council, but I was just one of five people who went Over The Edge for the Youth Council. The next day my left forearm and abs were sore, but I feel lighter and less afraid of heights after this experience. I’ll see what the next few weeks hold, but this may have been an event that has changed who I am.

Randy of 2020 Vision Quest’s GoPro video is a fantastic example of the set-up at the top: https://youtu.be/5GZg6FQq7bI

All United Way photos from the event can be found here and were used with permission.